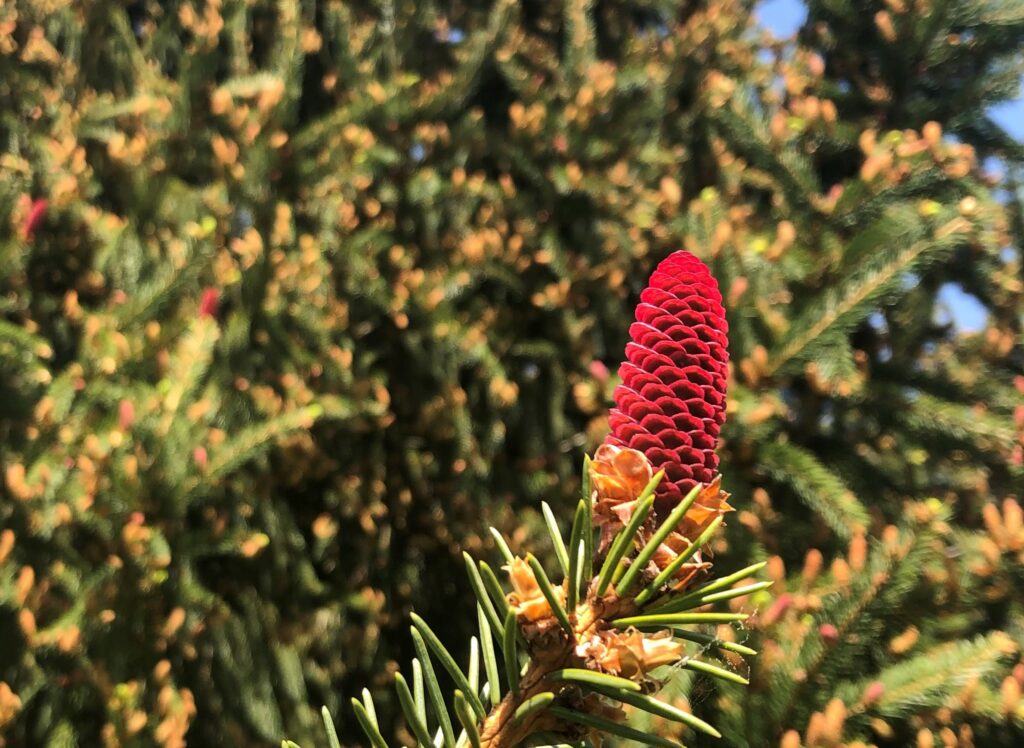 A Season of New Birth for Ancient Plants

Everyone admires the fragile elegance of spring wildflowers, and we should admire equally the stamina and durability of “pine cones,” the reproductive parts of conifer trees.  These plants do not produce a burst of flowers, rather they have tough cones that develop slowly. In our area, we have pines, spruces, junipers, and others that people are familiar with.

A female cone on a spruce tree, many times larger than a needle. The pollen from the male cone must blow into the cavities on the female cone and land in the right place, by chance. The yellow structures out of focus are depleted male cones on the same tree. Photo from April 27, 2021

Conifers (plants that reproduce with cones) are primitive in their reproductive biology among plants that have seeds, and their schedule is ridiculously slow in comparison with more modern, flowering plants. Male cones are small, and abundant, producing a great deal of pollen. The pollen blows from the male cones and drifts through the air, landing on a female cone by chance alone. This means the tree needs a lot of pollen in the air: People familiar with pine forests know everything gets covered in yellow pollen in the spring.

Fertilization of the female egg inside the female cone takes a long time, more than a year in some species. The exact same tree that produced the male cones (shown above) on April 11, 2021, and the females (above) on April 27, 2021, held mature female cones in May, 2022, beginning to shed the seeds that were begotten last year. A year is a long gestation.

By contrast, flowering plants act quickly. While not representative of a typical flowering plant, consider the dandelion. The dandelion will bloom, close, develop seeds, and then release them, all in just a few days. That’s fast!

Flowering plants that rely on insect pollination do not need to cast a great deal of pollen into the wind. Their insect partners come and get it, and then deliver it to another flower. They can also live in more sparse populations and still reproduce effectively because insects fly distances, from one plant to another, searching for the right plant.

How do these two strategies compare? Let’s look at some numbers. Cones are much older than flowers. The conifers that were ancestors of our modern pines, spruces, etc., dominated in the Mesozoic period, 252 million years ago to 66 million years ago, up to when the dinosaur-killing asteroid occurred. Flowering plants, the angiosperms, appear about 100 million years ago (or somewhat older), and after the asteroid, they had an explosive radiation of species. Today, we estimate that there are 615  species of conifers, and 300,000 species of angiosperms. Which is more successful?  I think we would all say flowering plants are. But, spending so much effort on pollen and a year or more producing seed, that deserves Honorable Mention.