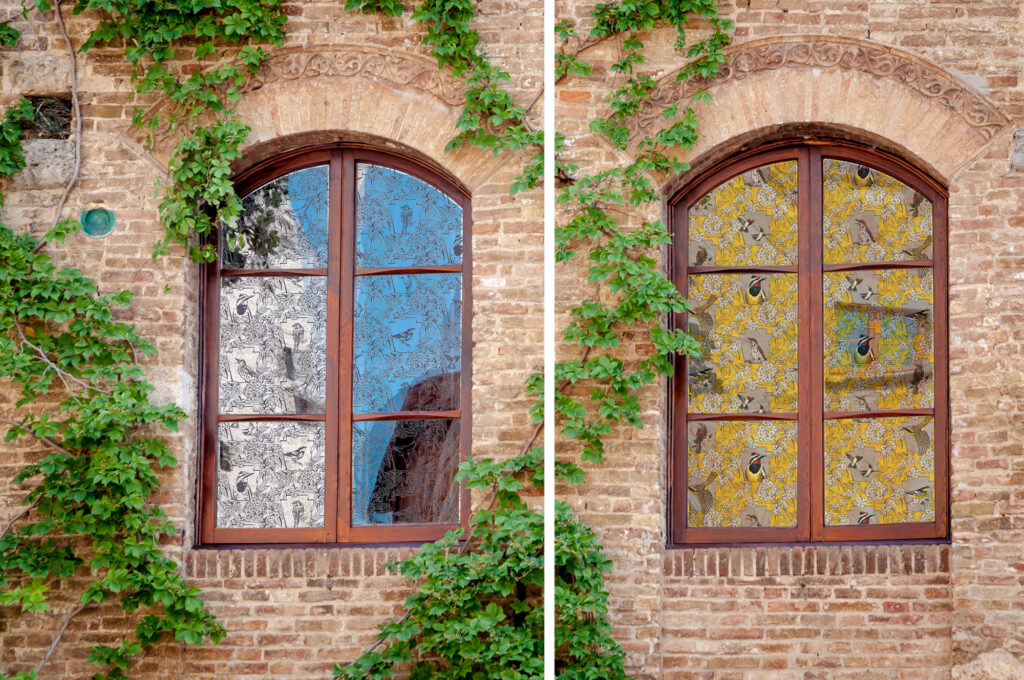 A particular point of pride of our bird research is the BirdSafe Pittsburgh program. A consortium of environmental groups and concerned citizens is working to create a more bird-friendly city, from restoring urban habitat to advising builders and architects on designing structures that will be less dangerous to birds. One of our prime collaborators has been Ashley Cecil, who was Artist in Residence at Carnegie Museum of Natural History. Ashley’s art is bird-themed, including one work that was reproduced on adhesive film that reflects UV light and is highly visible to birds. This film can be applied to windows so that birds will see Ashley’s pattern and avoid collision rather than see a reflection of a distant tree they would approach, striking the window. The film is available in color, making the window look like a stained glass, and in transparent form, resembling lace.

But does the film work? If you put the film on the window, does it reduce bird strikes? As the Director of Powdermill Nature Reserve, I thought I should lead by example and test the film on my own house. I have been monitoring bird strikes at my home since August of 2015. From about 6:00 am to 8:00 am, three or four days a week (at total of six to eight hours a week), I listened for strikes and recorded them. They are not random, nor evenly distributed. Certain windows seem to be a repeated problem, while others never seem to get hit. My house has 15 windows of various dimensions, plus a cathedral window that is 11 feet high and 21 feet wide. No bird has ever hit that window as far as I know. Most strikes occur when migrating birds are coming through, usually April and May, or September and October. When there is a flush of migration, it shows: I had seven strikes from August 27 to 31 in 2015, in only 10 hours of observation. Ignoring seasonal variation, and averaging across the entire data set, a rough estimate is that I observed about one strike for every 20 hours of observation. On June 14, 2018, our Urban Bird Conservation Coordinator, Jon Rice, installed the transparent film on the five most dangerous windows, leaving the others bare.

We have had zero bird strikes since the film was installed. To assess the effect of the film, consider that in the same period in 2017 we had seven strikes, in 2016 we had four, and in 2015 we had nine. Years have some random variation, but clearly, there is a reduction from these earlier three years’ average of 6.7 down to 0. More than that, my wife Donna and I became more vigilant since the installation of the film, and we logged about 10 or 12 hours of observation per week rather than six or eight we did for the baseline. If we use the baseline expected frequency of one bird per 20 hours of observation, then with the more thorough observations we would have expected a little more than one bird every two weeks, or about 10 birds in the 18 elapsed weeks, rather than 6.7. Using a simple “chi-square” statistic to estimate the difference between an expectation of 10 birds and an observation of zero, the probability is one in a thousand that we would get zero birds by random variation from an expectation of 10 birds. In other words, if our recent sample differs from our baseline probability purely by chance, we would have to measure 1,000 years to get one year as far from expectation as we got in 2018 following application of Ashley’s film. According to our scientific standards, we reject proposals that have a probability of less than one in 20. Our analysis is less than one in 1,000. We conclude that the film works very well to prevent birds from hitting windows. (Update: as of 2022, we still have very few strikes on the treated windows!)