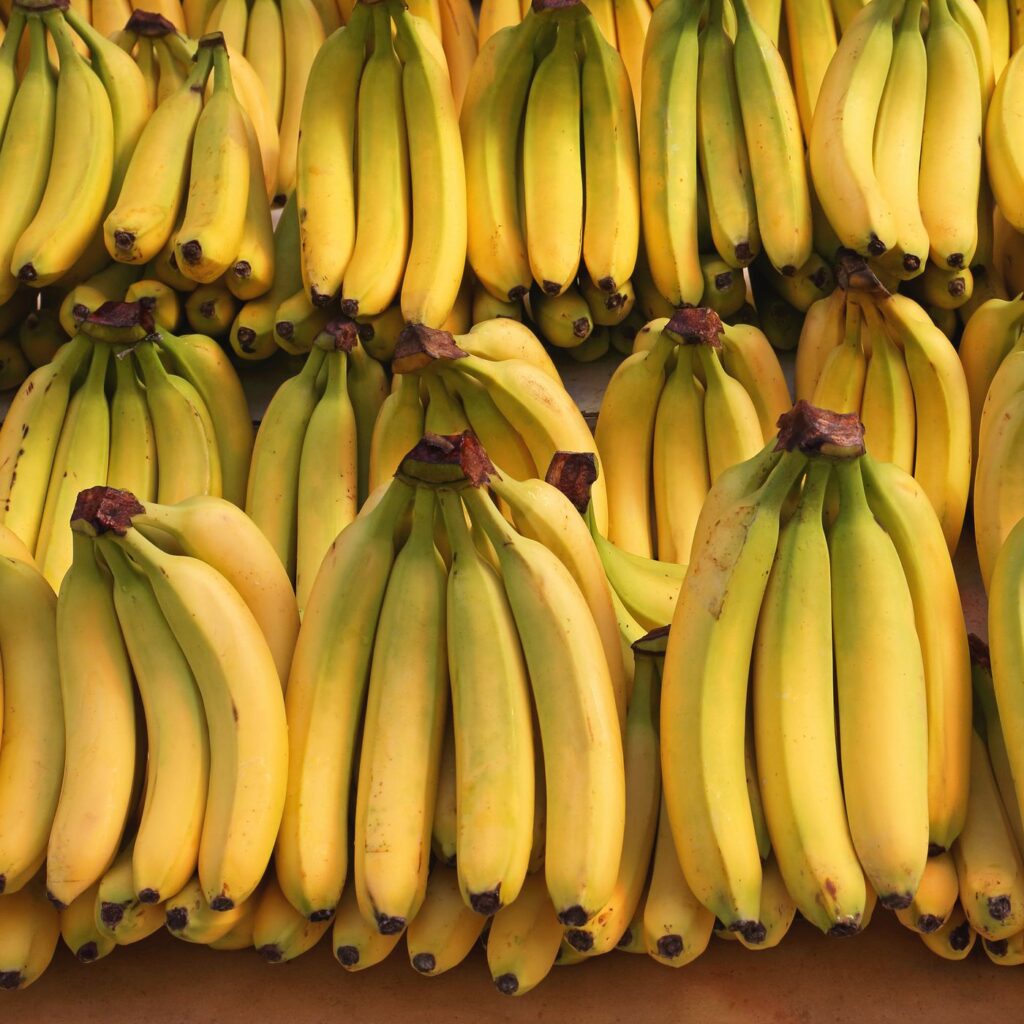 Banana: A Most Unusual Ordinary Fruit

With a global annual production of about 150 million tons, bananas (Musa acuminata cavendish) are one of the most common fruits in markets worldwide. The bananas we are familiar with were perhaps developed in southern or southeast Asia around 700 AD, and are believed to be a hybrid between wild Musa acuminata and Musa balbisiana. The most popular variety today is the Cavendish, one of about 1,000 varieties, which was developed prior to 1850 and proved more resistant to disease in the early 1900s than other varieties that were widely traded.

Bananas are harvested and shipped green, ripening after sale to the sweet and creamy food we enjoy, and are perhaps the most frequently discarded fruit because of their short shelf life. Other varieties are common elsewhere in the world, such as the plantain, which is large, hard, starchy, with a better shelf life, and is cooked before eating. The individual banana, that you peel and eat, or the “hand” of connected bananas that you may buy, are only a portion of the entire fruiting body, which is composed of many such parts and can be more than six feet long, weighing 80 pounds.

The variety we eat has no seeds, which is another desirable trait for the consumer. They are a triploid hybrid, meaning that they have three copies of each chromosome rather than the ordinary two. This prevents proper meiosis (dividing the genome in half) necessary to generate the sperm and egg for fertilization and production of seed. Despite lack of fertilization and seed production, the plant continues to develop the fruit, anyway.

Although they may be as large as a small tree, bananas are actually an herb with no woody parts.  What looks like the trunk of the tree is actually just the stems of the leaves above, and the tender, inner ones are edible. The plants grow for about a year, only bloom once but for a long time, produce their gigantic fruiting bodies, and die back to the ground. The roots send up another shoot the next season. Even large plantations may be essentially one clone propagated over a large area, making them susceptible to disease. The flowers emerge in bunches that correspond to the hands of the final stalk of fruit. Wild relatives in the banana family (Musaceae) are popular with hummingbirds, bees and other pollinators, and can be very showy, particularly the genera Heliconia (sometimes called “lobster claw”) and Strelitzia (“bird of paradise.”)

Bananas and their relatives produce large broad leaves that are used in a variety of ways. Two common uses are to fold them into a bundle, for cooking soft food (such as empanadas) or to carry things. They also can be laid on top of each other to create a waterproof roof over small buildings. They are usually produced rolled-up into an upward-pointing tube that will open out when the leaf is mature. This tube will hold rain water and creates a microhabitat (called phytotelmata), a tiny pool that small insects such as mosquitoes and other specialists use, some of them to be found no where else in the forest.  A spectacular example of phytotelmata is that of the “traveler’s palm” from Madagascar, which is actually a relative of the banana and not a palm at all.