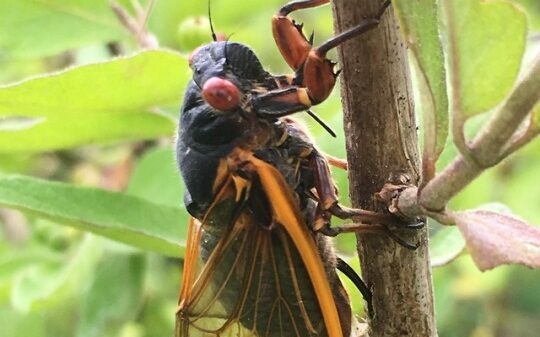 Broods XI and XII, the extinct cohorts of periodical cicadas.

Usually, at this time of year, millions upon millions of 17-year cicadas are emerging from the ground. Smaller than the green and black annual cicadas, periodical cicadas are easily recognized by their red eyes and great numbers. The periodical cicadas that emerge this year would be called Brood XI, and next year would be Brood XII, except that these broods are apparently extinct: They do not emerge anyplace. Here in the southwest corner of Pennsylvania, our most recent emergence was in 2019, Brood VIII, and they will not emerge again until 2036. We also have the edge of Brood V, which emerged in 2016, and will emerge again in 2033. The brood numbers are simply sequential, I, II, III, etc., based on the calendar year when they emerge. There are 15 broods, so in 15 of 17 years they emerge someplace in the eastern US, and in two years no periodical cicadas emerge (the years corresponding to extinct broods XI and XII).  However, every year there are a few stragglers who emerge late, usually one year late. Poor them, they missed their own birthday party! Wherever you are, keep your eyes open for these distinctive insects, and if you find one, take a photo and submit it to CicadaSafari.org so cicada researchers can keep track of these stragglers. Who knows, maybe there will be enough to start a new Brood XI someplace!

Cicadas feed only on roots. The damage they cause to trees is due to egg laying. They pierce the twigs on the underside, with a knife-like egg-laying tube called an ovipositor, and lay 10 to 20 eggs per incision. In the photo above, you can see the ovipositor behind the female’s back leg, inserted into the twig. At rest, the ovipositor would extend the length of the abdomen, so this one is about half embedded in the twig. In mid or late July, those eggs will hatch and the tiny nymphs will fall to the ground. They burrow down to find roots, where they will remain for 17 years, sucking plant juice.

Females can make dozens of separate incisions to lay hundreds of eggs in total. Because the cicadas need to leave their offspring on roots that will persist for 17 years, they prefer laying eggs in trees rather than shrubs, and tend to pick harder species, such as oaks, rather than softer woods like tulip poplar. Although they can feed on evergreen roots, the resinous nature of the sap in the twigs tends to suffocate the eggs, and they rarely lay eggs in evergreens. They can also feed on grass roots, and a big tree above a lawn becomes a popular egg-laying site. The many separate wounds on the twig interrupt water flow from the roots, and the twig often breaks or dies.

These damaged twigs are called “flagging” by cicada biologists, and they are a clear indicator of the density of females at a site.  A big tree may be supporting hundreds of thousands of eggs. This red oak over a lawn shows extensive flagging, the brown twigs at the end of the branches, from the 2019 emergence, but the photo from 2022 shows the tree is healthy and strong, nonetheless.

Despite the obvious damage to the tree, most trees do not suffer much unless they are little saplings. In fact, fruit tree farmers in the 1800s reported that their trees produced better crops the year after this natural pruning process.  Another benefit of the cicadas is that the millions of emergence holes open up the soil for air and water penetration and provide an avenue for nutrients at the top to pass into lower soil layers.  Although many people find the mass emergence of periodical cicadas to be annoying, they represent an inspiring and beneficial piece of our ecosystem, unique to eastern North America.

We likely will not see any periodical cicadas this summer, but if you see any stragglers, let us know!