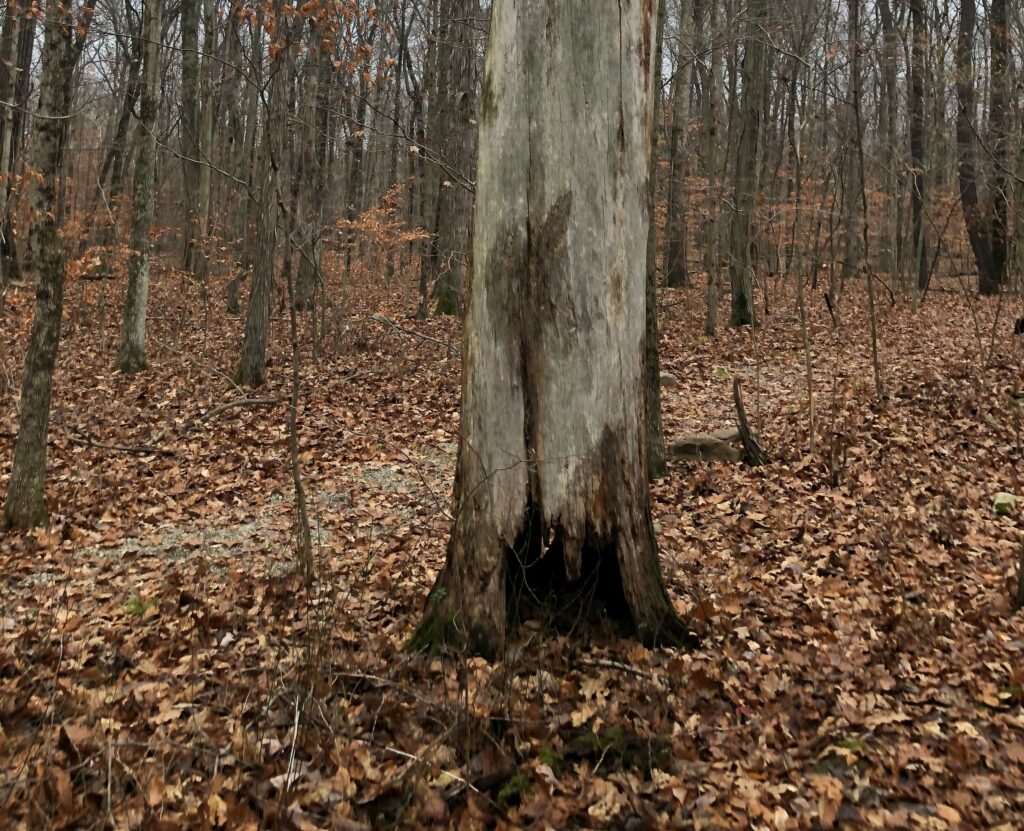 From The Dead, Springs Life

Many decades old, this hollow snag provides shelter or nesting space for mammals and birds.

People envision healthy, natural forests as places full of green trees.  This is not accurate. In natural forests, the dead trees are not harvested for firewood, or any other reason. They remain in place, either standing or on the ground, for many years, or many decades. From our vegetation data set of the forest of Powdermill Nature Reserve, we learned that a standing dead tree, called a snag, is sometimes the second or third most common type of tree in a study plot. Each species is tallied separately if alive, all snags are tallied together regardless of species, so all dead trees together are a big number.

Older stands bear more dead wood, of course. This does not accord with what we feel when we are out in the woods. We want Nature to be green, and dead trees suggest to us that something is wrong. Especially in a healthy woodland, we remark at the growing trees, ignoring the dead. But, once someone alerts us to this high frequency of dead trees in a healthy woodland, we begin to notice dead trees everywhere! Previously, we simply looked past them, ignoring them as if they were not there because, well, they’re dead.

Dead wood is a critical part of the ecosystem. Dead wood provides nutrition for fungi, or many insects that in turn support other animals higher up the food chain, such as woodpeckers and other birds. Peeling back the bark on a dead tree or log will reveal all kinds of arthropods and other life taking advantage of the most nutritious part of an old tree.  Because of the moderating effect of moisture and activity of microorganisms, a rotting log represents a microhabitat that is more stable than the surrounding forest floor, warmer on a winter night, cooler on a summer day, and moist in the drought. Digging under a rotten log creates a protected burrow for snakes, salamanders, and small mammals.

In forests that have not been disturbed, snags often take unexpected forms as they collapse from their original stance and take an unlikely position leaning on neighboring trees. The aerial snag shown here is more than 40 feet long, and was suspended 10 feet high in the understory for several years already when it was photographed in 2020. As of 2022, it is still there. With no contact with the soil, it will likely decay very slowly. If you see lots of dead wood, that might be a good sign regarding the history of the forest.

Many insects bore into dead wood and feed on the decaying tissue, or the fungi, or microorganisms in the decaying wood. These “saproxylic” species are generally a legacy of old natural forests. A large, dead tree in an old forest supports its own ecosystem, just like a small wetland would, pumping up biodiversity and ecological connections. The species colonizing the decaying tree will be scarce in forests where timber is regularly removed rather than allowed to rot. One authoritative review of forest management suggests leaving five large snags per acre to preserve saproxylic species. The next time you see a standing dead tree and think “someone should cut that down,” ask yourself if it is playing an important role in death as it did in life.