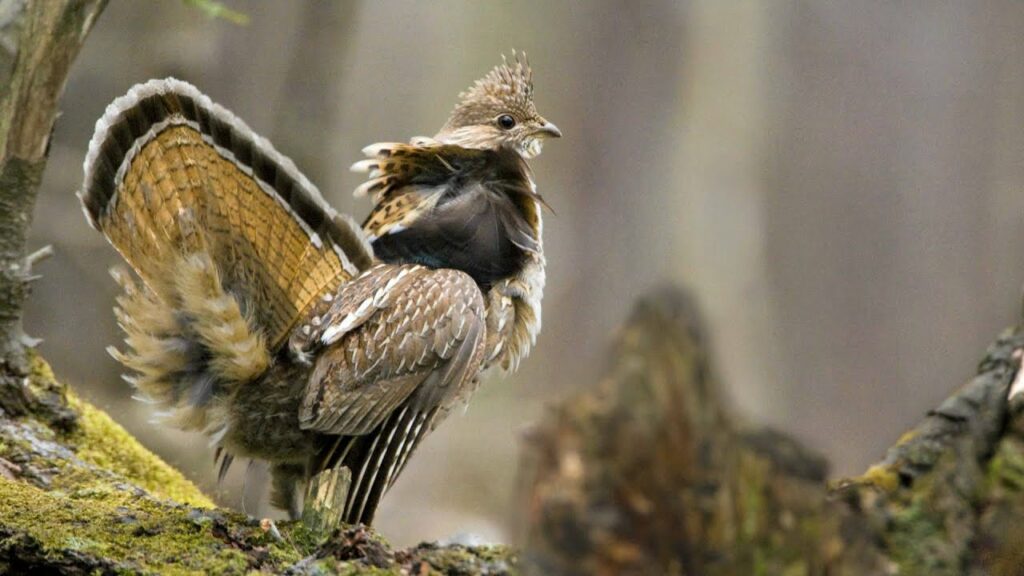 Game birds: Turkeys and their relatives

For many who grew up in North America, a dinner of roast turkey symbolizes feast and celebration.  Turkeys were important to the Native Americans, too, and as many nations designated clans with animal names, the “turkey” clan was a common moniker. The large and strong feathers were often used in showy native headdresses, and many traditions include legends or parables of turkeys, see http://www.native-languages.org/legends-turkey.htm for examples. But turkeys are only one of a large group of interesting and important birds called “game birds” because of their popularity with hunters. One such bird is the Ruffed  Grouse, State bird of Pennsylvania (featured image, above.)

Turkeys are native to the New World, and the species we know from our woodlands (Meleagris gallopavo) ranges from Canada to Central America. The males’ dramatic mating displays spread showy feathers to present a large image, with blue and red coloration to the head. Recent research indicates that when there is more than one male displaying at a given location, those males are usually brothers. Females prefer to choose among several displaying males than to visit a solo male, so the brothers get many more customers when they work together than if they were alone. If you are lucky, you may see displaying males from spring to early summer, generally mid-March to June.

The name “turkey” comes from the English colonists referencing a bird familiar to them when naming the North American bird. Their bird in England was the guinae fowl, imported to England from Turkey.  The French did something similar, calling the bird “coq d’Inde,” (rooster of India), or eventually “dinde.” By contrast, the early Spanish colonists in Mexico adopted the word “guajolote,” which is from the Nahuatl language of the Aztecs. Further south, they used the work “pavo” which correctly applies to the Asian peacock.

There are about 290 species of  game birds throughout the world, from the tropics to the arctic. They are popular everywhere for their interesting habits, showy plumage, and good eating. The most common is the chicken, or Red Jungle Fowl in the wild. Now estimated to number about 30 billion worldwide, the chicken is probably the most abundant large land animal. Other game birds include pheasants and peacocks, both being spectacular birds.

So, enjoy your turkey on Thanksgiving Day, and know that we are thankful for Game Birds!