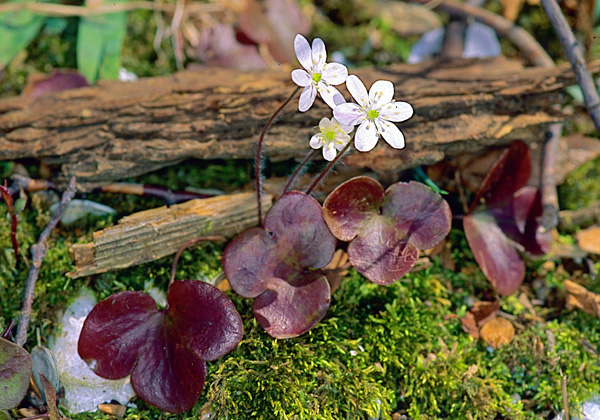 Herbalism and the Doctrine of Signatures

The glossy, lobed leaves of Hepatica inspired the plant’s name, and its presumed medicinal value.

As spring begins, we can find in the woodlands certain attractive flowers of special note.  Whereas we admire them for their beauty, some were valued in centuries past as medicinal herbs. Among our early spring flowers with such history are hepatica and toothwort, whose names still preserve their supposed medical use. “Hepatic” derives from Greek and means of, or pertaining to, the liver. Toothwort (Old English “wort” means plant or herb, or root) was formerly classified as Dentaria, meaning tooth, and was supposed to ease ailments of the teeth. Does the name preserve actual function, or is the connection a myth?  The answer depends on exactly which plants we examine.

Most legitimate early medicines were botanical in nature. In some cases, the plants gave the medications their names. Foxgloves (genus Digitalis) gave us the medication, digitalis, that is sometimes still used to treat heart failure. The active ingredient in aspirin was originally ingested as a tea made from bark of the willow tree, genus Salix. Hence, the name of the chemical, “salicylate.”

But not all names connect to valid medical uses. The genus Hepatica has glossy, lobed leaves, that loosely resemble the sheen and shape of a liver. According to what herbalists called the Doctrine of Signatures, the resemblance indicates a medical function. Because Hepatica leaves resemble a liver, the plant is assumed to have properties that are beneficial to the liver. This perspective can be traced back to the ancient Greek fathers of medicine, Galen (Second Century BC) and Dioscorides (First Century BC), and was revived when herbalism gained in popularity about 1500. Thus, certain plants were assigned functions without any traditional history of folk remedies. When scientific nomenclature was established in the mid 1700s, some of these supposed medical uses gave certain plants their names.

The Doctrine of Signatures proposed some connections that are not just false, but also rather far-fetched. Violets were presumed to provide medicine for heart ailments because their leaves are heart-shaped. Walnuts were proposed to be good for your head. That the blossoms of eyebright (genus Euphrasia) resemble an eye is enough of a stretch, but believing it to be therefore good for eye infections strains credulity. In fact, a 2010 report from the European Medicines Agency states “The ocular use of Euphrasia is based upon tradition. However, since the efficacy of the claimed ocular uses is undocumented and external eye application is not hygienic, therapeutic use cannot be recommended.”

Today, we have an entire industry promoting dietary supplements valued at more than $100 billion per year. Many of these are herbal remedies, often derived from plants that were in earlier times believed to have some medicinal value. Most herbal remedies are not good substitutes for modern medicine, no matter what the plant’s name means.