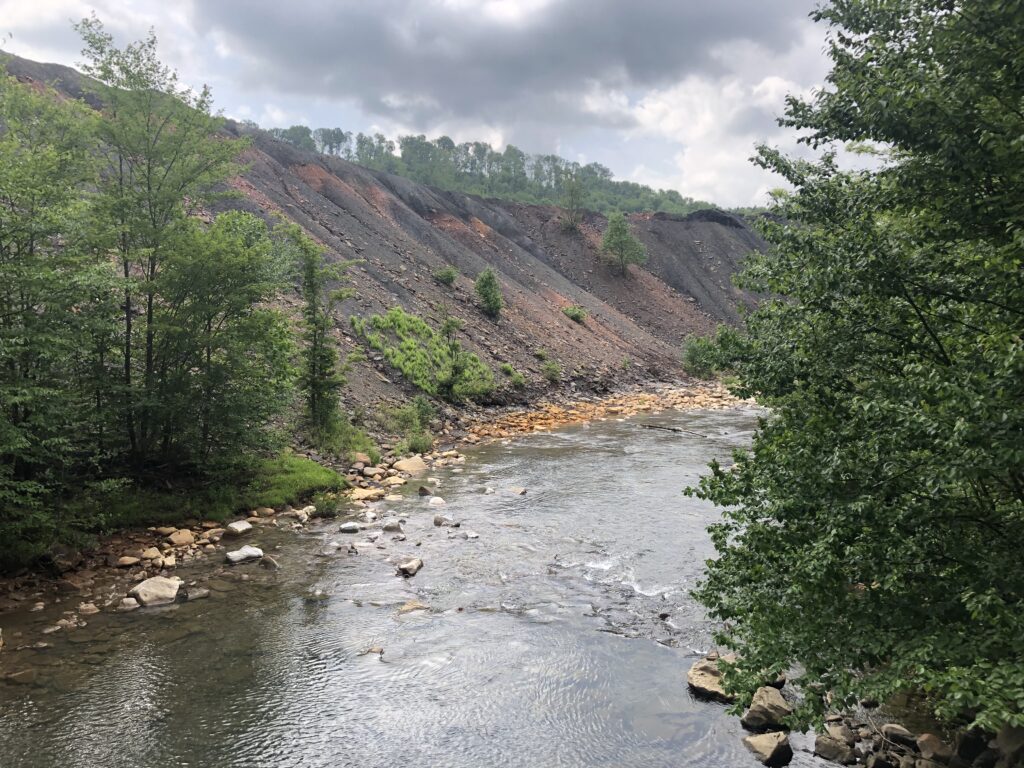 How to save the world, two cups at a time.

Those who live in western Pennsylvania know that coal mining was a major economic activity in this area. The important steel and glass industries were centered in Pittsburgh and Johnstown partly because of the ample supply of local coal, while the bulk of the mines shipped their product elsewhere in the US and abroad. The US was the world’s leading coal producer by 1890, surpassing Britain. All of this industrial strength came at a cost we pay today. The featured image above shows a mountain of historical coal mining waste, called a “bony pile” along the bank of Blacklick Creek in Cambria County, PA. It is half as large in area as the town that built it, and several times taller than the trees.

Often dug into the side of a hill to get to coal seams deep underground, the mines tend to fill with ground water. Iron, aluminum, sulfur, and other elements go into solution in the mine pool. Water emerging from the old mine interacts with oxygen in the atmosphere to create sulfuric acid and other toxic chemicals. Iron produces a rusty orange or yellow precipitate, and aluminum loading looks milky. Both of these are toxic, and the sulfuric acid content can be as harsh as vinegar. (Consider that vinegar has long been used as a household cleaning product because of its caustic nature.) This discharge is called abandoned mine drainage (sometimes acid mine drainage), or AMD, and it degrades the soil and water that it contaminates. With thousands of AMD sites, we need an army of people to help. We have an army.

Trained volunteers visit AMD sites regularly and provide water samples and data measured in the field to the Department of Environmental Protection. In turn, the DEP prioritizes mitigation efforts. At Conemaugh Valley Conservancy, we manage a team of volunteers that sample more than 90 sites in our area, performing labor that DEP could not possibly muster on their own budget. These trained and dedicated volunteers visit remote and often difficult sites four times a year, in some cases monthly. About two cups of water are collected and tested at each site. We also sample the streams and rivers nearby to assess the effect of the AMD as it enters the environment nearby.

If the situation is bad, DEP may build a system to treat the AMD. A large “active” system will resemble a sewage treatment plant, and will require operating and maintenance costs in perpetuity.  Less costly, a series of ponds that have different properties may remove or settle the toxic components passively as the water flows slowly through them. These systems can occupy many acres, and they can look terrible, but they may do the job with minimal maintenance and operating costs.

If flow rates are low, perhaps a small artificial wetland with limestone and cattails will correct the acidic water and take some of the metals out of the water. Often very effective, the final pond in the system can be full of life, with healthy water released back into the environment.

Correcting the legacies of bad decisions made generations ago is a daunting task, but passionate and determined people are doing it, two cups at a time.

For an inspiring example of the tremendous success story of the Little Conemaugh river, watch the short documentary made by the Foundation for Pennsylvania Watersheds,  “A River Reborn,” available here.