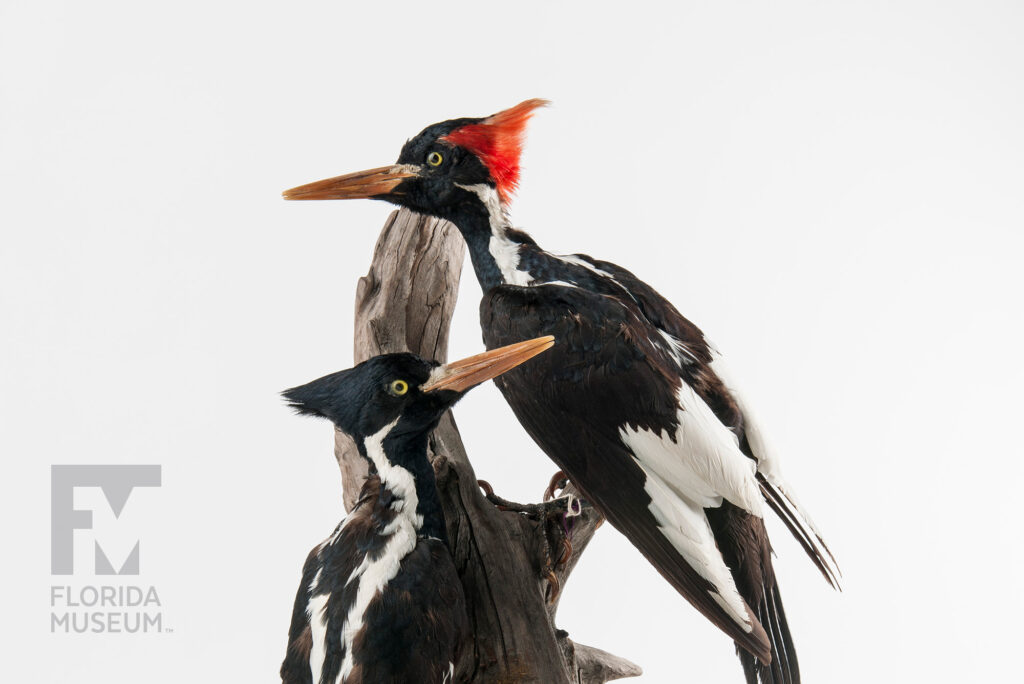 Ivory-bills: They were lost, but now they’re found.

Mounted taxidermy specimens of male (above) and female (below) Ivory-bills, from the Florida Museum.

We saw an important announcement this last week with the statement that Ivory-bill woodpeckers survive today. This claim will now pace through a protocol of skeptical inquiry and a spirit of challenge and disproof.

A good researcher can see the final conclusion before all the data are in hand. But other scientists need to be convinced, so between “discovery” and “acceptance” lies a zone of debate, sometimes including posturing and politics. We will see this debate now with the wonderful announcement on April 11 that a team of ten top ornithologists have found a surviving population of the “extinct” Ivory-billed woodpecker, Campephilus principalis, the largest woodpecker north of Mexico.

Similar to the common Pileated woodpecker (Dryocopus pileatus), the Ivory-bill is easily recognized because it is larger and has both a white bill and a broad white saddle across its back, and more white feathers elsewhere. The main cause of decline in Ivory-bills is habitat destruction through the 20th Century. They nest in old-growth bottomland forests of the southeastern US. Many of these lands have been cleared for agriculture, drained, or otherwise developed. Feeding mostly on larvae of wood-boring beetles that they dig out of rotting trees, they require having large tracts of forest that includes big, dead trees. As an entomologist, I wonder how the loss of the Ivory-bill habitat indicates the loss of insects: old surveys of Ivory-bill gut contents show they rely greatly on long-horned beetles of the family Cerambycidae, beautiful insects! If Ivory-bills have no adequate habitat, neither do the beetles. Greater is the loss.

The last confirmed sighting of an Ivory-bill was in 1944, and in 2021, the US Fish and Wildlife Service recommended declaring Ivory-bills as extinct. There have been many reports over the years that might demonstrate that they were not extinct, including photos, videos, and a feather. Critics complained about the resolution of the photos, or other aspects that were imperfect. With the idea that a very-rare bird’s presence needs to be more thoroughly documented than that of a common bird, all such reports were dismissed because they could not be repeated at the same location, close in time. For common species, such detail is not generally required. We leave for a different discussion that it is philosophically wrong to require more authentication to prove a rare event than to demonstrate a common event.

On April 11, 2022, ten ornithologists, who have been working for ten years to document the rare birds, announced that they have succeeded in providing multiple lines of evidence for several Ivory-bills at a site in Louisiana. Lead author Dr. Steve Latta, of the National Aviary in Pittsburgh, PA, says they are “fully confident” in their conclusions. This is dynamite given that it is heretical to say Ivory-bills are alive and breeding. Let’s watch over the next couple of years and see if this glorious bird is here or not.

For related post, see the discussion of the importance of dead wood, March 19.