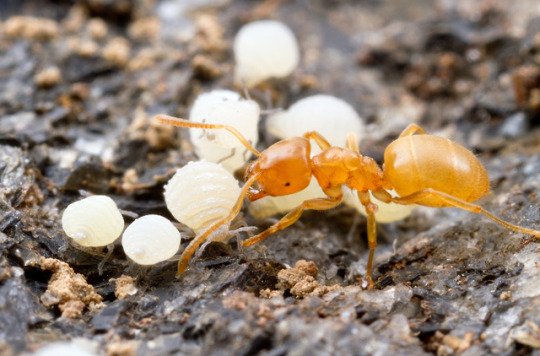 Common Lasius ants tend aphids that live underground feeding on plant roots. They protect the herd of aphids from other ants, and move them to more productive roots if the plant dies back. Sometimes the future queen will pick up an aphid in her mandibles and carry it along on the mating flight, and place it on a good root in the wall of the first nest chamber to start a new herd of aphids.

In late summer, Lasius have their mating flights. A warm day with some rain in the afternoon to soften the soil, and then a clear sky near sundown would be perfect. The ants will be in the top of the nest, awaiting the exact right moment. Somewhere between about 4:00 pm and 7:00 pm, when the atmosphere is just right, workers dig several passages to the surface, and usually the small and slender male ants emerge first, taking flight quickly. Future queens, much larger than the workers or males, and bearing large wings, emerge next and take flight. All the colonies in the landscape where the weather is appropriate may emerge in a time span as short as five or ten minutes.  We found dozens of colonies of two species emerging in an area of our lawn about 20 feet by 40 feet.

The many gossamer wings may give the impression of smoke rising from the soil. Swallows, swifts, other birds, and even dragonflies will fly in circles snapping up the winged ants. The queens will mate with one or a few males, who die promptly, and then the queens will dig into the moist soil and create a chamber for her new nest, maybe with an aphid she carried along the way to start her new colony.

But the life of Lasius ants is not all pastoral peace and harmony. Two different methods of parasitic attack have evolved where a queen of one species of Lasius will invade the nest of a different species of Lasius to take it over. In one of these methods, the parasitic queen releases citronella, a lemon-like odor that is pleasant to humans but communicates alarm to ants. The workers avoid the invading queen who works her way into the chamber where the host queen is. Quickly, the parasitic queen accumulates the odor of the host colony, and the workers will not recognize her as an alien usurper.

Below, we see several large, winged Lasius claviger queens among many small workers, preparing to fly. These queens will parasitize mature colonies of other species, such as L. neoniger in the photo above. A few small, dark males are visible top, center.

If you keep a sharp eye out in late summer, you have a good chance of observing a mating flight of Lasius or another ant species, but you have to be in the right place at exactly the right time!