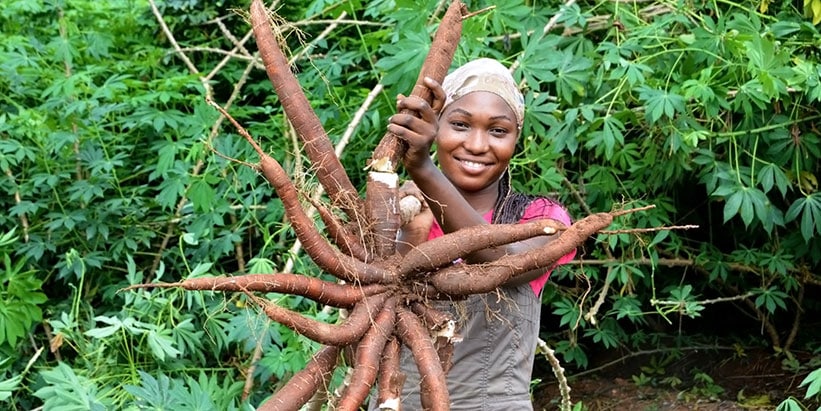 A Nigerian manioc farmer with roots from one plant. The leaves (behind her) are used in popular dishes.

Most Americans are familiar with the prepared gelatinous food tapioca, but few are aware of how important the original food crop is worldwide. Tapioca is derived from the root of the manioc plant (Manihot esculenta), also called cassava, or yuca (not to be confused with yucca), depending on which of three Native American languages we choose to mimic. Originally domesticated by Native Americans, manioc is now the fourth most important food crop in the world following the grains of corn, wheat, and rice. The largest commercial producers today are Nigeria and Thailand. The plant is a woody shrub, as tall as four meters,  grows well in poor soils, and is generally drought resistant. A single plant will produce several kilograms of large starchy tuberous roots radiating outward like spokes of a wheel. The tubers are resistant to rot and decay, and can even be left in the soil for long periods.

Manioc is in the famously poisonous family Euphorbiaceae, and most varieties contains a cyanide compound, which makes the tubers toxic when raw or undercooked. “Sweet” manioc is a variety that does not have this feature, but cannot be stored for long periods like the bitter variety. Leaves can be eaten and are important in certain African cuisines.

The tubers can be ground or grated and dried into flour that can be baked into cakes. One of Brazil’s gifts to the world is the famous pao-de-queijo (“cheese bread’), made of manioc flour and cheese.

A legend holds that in times of plenty, the Tupí people of the Amazon basin would make large cakes that they would bury in sandy banks above the flood level of the river, and dig them up years later to eat in times of hardship. One tale reports that Portuguese explorers of what is today Brazil were supplied with such cakes by their native guides. The Europeans thought the cakes were the tubers of a plant, never suspecting that their guides were visiting the local food bank.