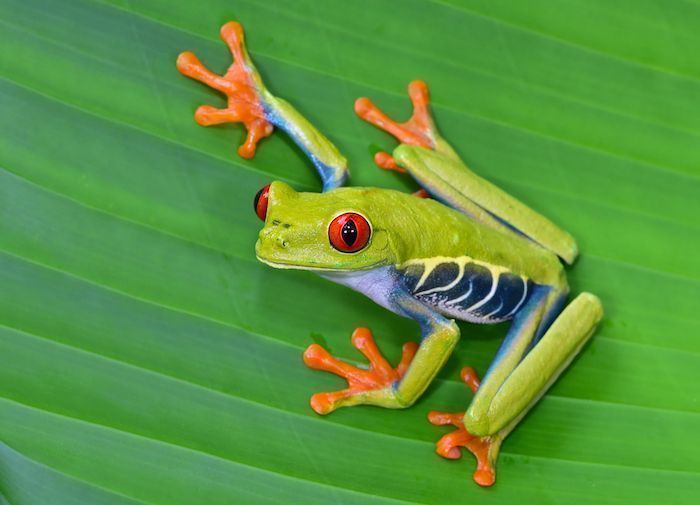 Seen One Frog, You’ve Seen Them All?

When people speak of “animals,” they usually refer to mammals and birds. Maybe they mention reptiles, certainly dinosaurs if they think of them. They rarely think of amphibians in this way; frogs, toads, and salamanders. And yet, these survivors of ancient lineages are most noteworthy in many ways. One of the very curious facts about frogs (and their relatives we call toads) is that they always look like frogs, no matter who they are, or where they live. Why is that unexpected?  Let’s take a little tour…

Frogs are known from fossils dating back about 250 million years ago, before any of the dinosaurs that we see in popular media. Scientifically called “anurans,” frogs and toads survived the great extinction that killed off those dinosaurs. Frogs and  toads live everywhere, from the tropics to the arctic, in rainforests and in the desert, never leaving the water versus never leaving the canopy of trees. Yet, they always look like frogs. How is this possible?

The most aquatic anuran, the “Suriname Toad,” (Pipa pipa) never leaves the water. For this reason, it was believed to be primitive, but that is now known to be false. Male Pipa pipa host their tadpoles on their backs in specialized breeding pouches, a kind of incubation. On the exact opposite side of the spectrum, tropical American tree frogs in the genus Eleutherodactylus may never come to the ground, and their eggs, laid in tree holes or wet leaf litter lodged on tree limbs, develop all the way to adult morphology without ever going through a swimming tadpole phase.

While the wet tropics host the greatest diversity of frogs, frogs also live in such harsh deserts as Namibia on the coast of southern Africa, where they do not rely on free water at any time in their lives (Boulenger’s short-headed frog, Breviceps macrops). On the other end, the Wood Frog (Lithobates sylvaticus) of North America can survive being frozen in winter, and ranges farther north than any other amphibian.

Most frogs are hoppers, some large ones are walkers, many are swimmers or climbers, but there are also gliders. The flying frog of southeast Asia will jump from its perch in a tree, spread large webbed feet, and glide to a safe place below. Perhaps in a few million years, will they actually fly?

At the top end of the size spectrum, the cane toad (or marine toad, Rhinella marina) can be nine inches long from nose to butt, without counting the back legs, and weigh up to three pounds. That is a predator with some status. I once saw one catch and swallow a mouse in the wild. Despite being the largest anuran, tadpoles of the cane toad transform and leave the water at a very small size so they can take advantage of ephemeral pools in the forest understory. A large female may lay 30,000 eggs a season, which is impressive reproductive potential, and explains why this species has become invasive in some countries. On the other end, the smallest frog is Paedophryne amanuensis, from New  Guinea. It is the smallest terrestrial vertebrate known, about the size of a housefly, at a bit more than a quarter of an inch in size. By now, I hope most readers agree that these animals occupy an amazing amount of ecological space.

How is it possible that these amphibians are among the oldest of all terrestrial vertebrate lineages, and are found in nearly all habitats, yet they all look like frogs? Consider that in one quarter of the time frogs have been evolving, mammals have produced whales and bats, lions and moles, monkeys and elephants. So, who is the evolutionary hero?  Do the mammals that vary so greatly earn more respect than the frogs?  Frogs found a way to colonize the entire terrestrial environment, and for a long time, with one basic plan. That is huge Darwinian success. Try playing poker for 200 million years with the same hand. Frogs rock.