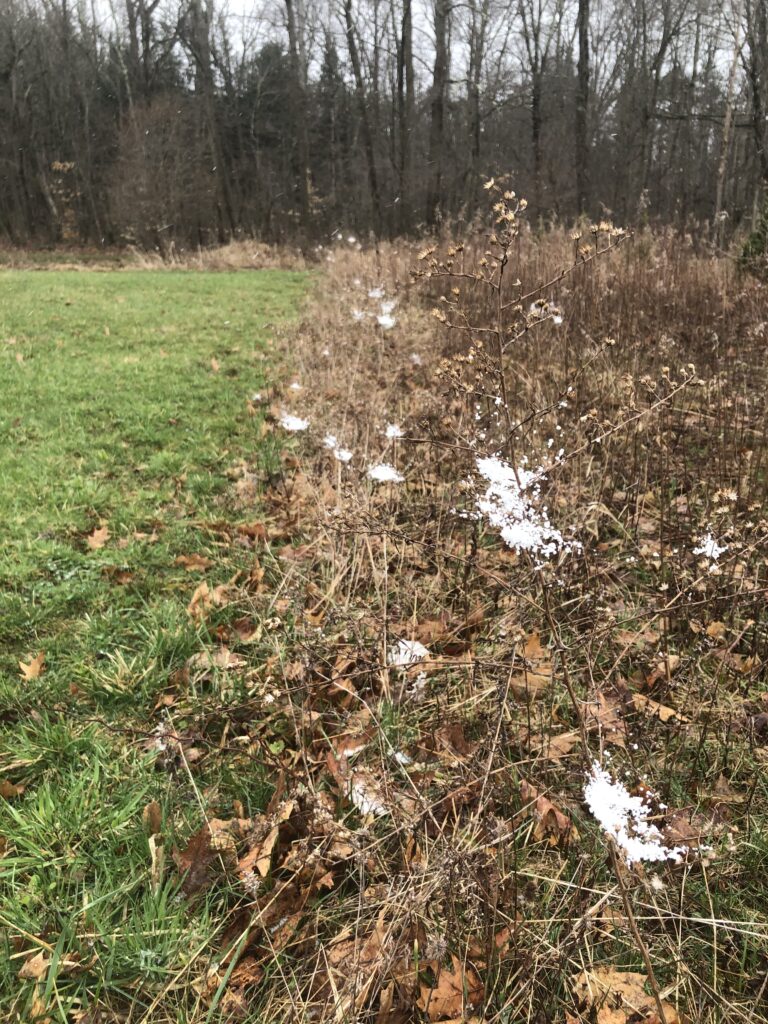 Some invisible spider webs are revealed by a light snow

A late winter snow dropped flakes that melted on the ground, but those that were still up in the cold air remained. As a result, we were able to visualize many spring spider webs that we would never ordinarily see. This group shows the very common spider family Linyphiidae, which are said to have the now-forgotten common name of “money spiders.” The snow allowed us to estimate that there were more than 10 webs per square meter at this site, which means it is a dangerous place to be an insect. There isn’t much space where you can move around and NOT hit one of these webs. Being a small flying insect seems to be a sentence of doom.

Linyphiid webs are not anything like the spiral spider web we all admire. Linyphiids build a sheet where they hunt, and then chaotic lines above it to interrupt the flight of insects, causing them to fall upon the sheet.  Largely invisible to our eye (and the insects’ too!), only special circumstances show us how common these spiders are.

Only one of many families of spiders, there are close to 5,000 species in the family Linyphiidae, comparable to all living mammals. Taxonomists recognize more than 600 genera in the family, which tells you that they have a lot of other evolutionary specializations to get such a large number of named groups.  Old European legend says that if a linyphiid walks upon you, it has come to spin you new clothes, hence the name “money spiders.” One wonders who ever validated that legend by saying “yes, they made this for me…”

Linyphiids are pretty. They are graceful, often nearly transparent or pale green, sometimes with silver and gold highlights. We offer this image from Ukrainian Information Biodiversity Network:

People commonly inquire about legends such as swallowing spiders at night. The idea that you swallow spiders at night is false. See this article from Scientific American.

Spiders are one of the most abundant and fascinating animals in our environment. Learning to appreciate them brings wonder and joy on a regular basis, wherever you are.