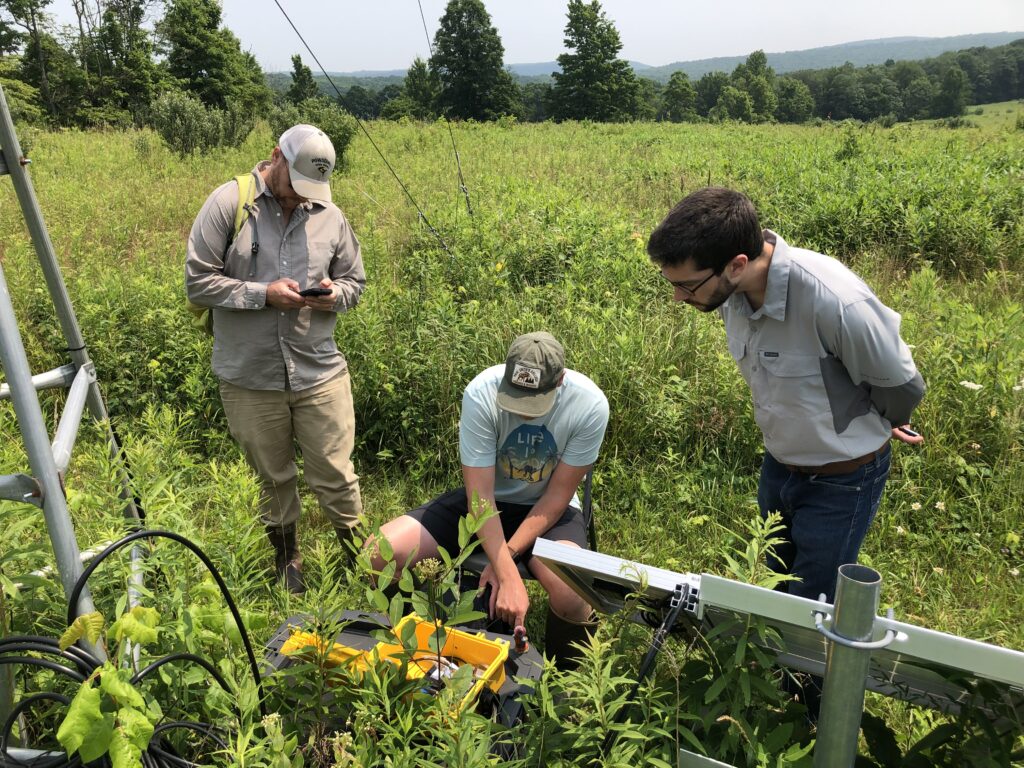 The Spirit of Research at Powdermill

When people think of scientists doing research, they tend to think of a laboratory with microscopes, technical machinery, exotic chemicals, and a person in a white coat doing “experiments” to invent a miraculous new compound, or maybe cure a disease. We have a technical laboratory with microscopes, machines, and chemicals at Powdermill, and we enjoy that kind of work. In reality, most of our research is done outside, with living plants and animals in the field. Usually we are in muddy boots, and we are more likely to be wearing rain gear and backpacks than white coats.

Our research comes in several flavors. Because we own the land, we can invest in long-term studies that require strong continuity. Examples of this would be our studies of birds that migrate in spring and autumn along the Appalachian ridges, traversing routes from the Caribbean and South America to Pennsylvania, Canada, and the Arctic. Since these studies were initiated in 1961, we have compiled the longest continuous data set of this type for any American research institute.  Another example would be our forest succession research, initiated in 2012, and intended to last several decades. These long-term studies are not likely to be undertaken by the college professor who must show results promptly for promotion and tenure, so it is important that places like Powdermill commit to them.

On the flip side, we support student researchers to use Powdermill for their projects that have to be completed in a short time, between one summer and several years, depending on whether the research is for a senior thesis or a PhD. Together, the students embrace many topics across the entire diversity of biological systems: What do trout eat? How effective are birds at dispersing seeds? What plants colonize disturbances in the forest? The work of a long-term study can be thought of as composing a careful symphony, with several different themes that form a single big work. In contrast, student projects represent the catchy tunes coming from a dance club: each centered on a good riff, immediate and focused, then another tune, and another. Both the symphony and the dance band are important to our scientific culture, and together they demonstrate the relevance of the nature reserve.

Field stations necessarily focus on topics that occur on their landscape. Most of our work has a strong relevance to Pennsylvania in particular, but also to Appalachia and eastern North America in general. Sometimes our work in Pennsylvania connects us to a much broader audience, as the migrating birds that spend the winter in South America do. We often host researchers from other countries who view Powdermill as an exotic locale. Every year we host a series of workshops to train the next generation of scientists, and every year we have far more applicants than spaces. In the last decade, an award-winning program that sponsors Latin American guests (so that the actual cost of the program is not a barrier to applicants) has trained about 120 scientists from 10 nations who came to Powdermill to learn our research techniques. When they return to their home countries to resume their scientific careers, some of our Powdermill culture goes with them.